I found this gem at DailyKOS. Thank you dreaminonempty. It is our duty to inform citizens of politicians not voting in the best interest of their constituents. Holding them accountable will ensure they either shape up or get voted out of office.

These are the Democrats who voted against abortion coverage, Wall Street reform, and the environment 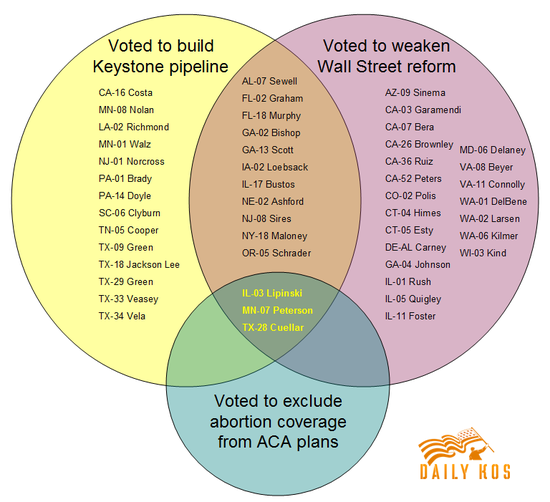 A little while back, we showed you the House Democrats who voted with Republicans on two key topics: the environment and Wall Street reform. Today we add a third topic: abortion.

Yesterday, the House voted on a bill to codify a ban on federal funding for abortion, but with a new twist that would essentially exclude abortion coverage from ACA plans. Three House Democrats voted for this bill: Dan Lipinski of Illinois, Henry Cuellar of Texas, and Collin Peterson of Minnesota.

As it so happens, all three of these Democrats also voted with Republicans on approving the Keystone pipeline and gutting Wall Street reform. What will they vote for next?