Drinking water has no party. 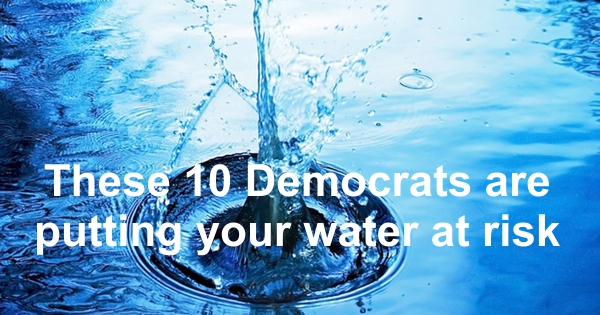 The 2005 Energy  Bill was a giant corporate giveaway. The Washington Post reported then the following.

The bill exempts oil and gas industries from some clean-water laws, streamlines permits for oil wells and power lines on public lands, and helps the hydropower industry appeal environmental restrictions. One obscure provision would repeal a Depression-era law that has prevented consolidation of public utilities, potentially transforming the nation’s electricity markets.

It also includes an estimated $85 billion worth of subsidies and tax breaks for most forms of energy — including oil and gas, “clean coal,” ethanol, electricity, and solar and wind power. The nuclear industry got subsidies for research, waste reprocessing, construction, operation and even decommission. The petroleum industry got new incentives to drill in the Gulf of Mexico — as if $60-a-barrel oil wasn’t enough of an incentive. The already-subsidized ethanol industry got a federal mandate that will nearly double its output by 2012 — as well as new subsidies to develop ethanol from other sources.

U.S. Senator Kirsten Gillibrand today announced three new amendments to the Keystone XL Pipeline Act that would protect clean drinking water and hold oil and gas companies accountable for spills. Speaking on the floor of the Senate, Senator Gillibrand reiterated her opposition to the Pipeline project but said the bill must be made better for Americans.

“This project has many risks and few advantages, and I will be voting against it, but if this legislation does pass in the Senate, we should at least try to make it a better bill,” said Senator Gillibrand. “There is no excuse why we can’t turn the Keystone XL Pipeline Act into an opportunity to protect our clean drinking water, and ensure that polluters have to pay to clean up their own messes.”

“This amendment says simply to Big Oil:  If you break it, you buy it,” said Senator Robert Menendez, who jointly filed Amendment 65 along with Senator Gillibrand. “The best way to prevent oil spills is to make sure oil companies like TransCanada pay for all of the damages oil spills cause. If you hurt small businesses or communities, you fix them.  If you hurt someone, you make it right.  If you pollute, you pay.  This amendment removes the cap on big oil companies’ liabilities, helping to make sure those companies do the right thing by the American people should accidents happen.”

The three amendments include:

Amendment 48, to remove the Halliburton loophole from the Safe Drinking Water Act, and finally require gas storage and gas drilling companies to comply with the clean water laws of the United States. Every other energy industry already has to comply with the Safe Drinking Water Act, and this amendment would finally hold the gas industry to the same environmental and public health standards as everyone else.

Amendment 65, introduced with Senator Menendez, to make oil companies financially responsible for the damages they cause when they spill oil onto our land and into our waterways. The current cap on liability is only $350 million dollars, including cleanup and compensation; this amendment would lift the burden from taxpayers and remove the arbitrary limit on what companies can pay.

Amendment 76, to allow homeowners and business owners whose property has been damaged by a natural disaster to use their federal disaster assistance funds to upgrade their property’s energy efficiency. Currently, disaster assistance can only be used to replace what was lost, even if the property was not up to current standards. This amendment would let property owners not only protect against the next disaster, but also save energy, reduce emissions, and lower their costs.