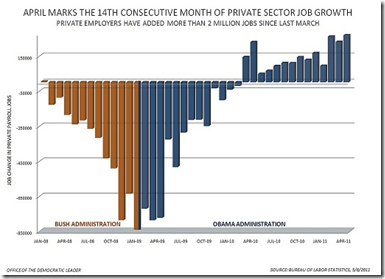 Paul Krugman in the New York times article Bain, Barack and Jobs lays it out well. While it is true that we were in a free fall when President Obama walked into office, those job losses were not because of any of his policies.

That said, Obama’s job creation though anemic because of the intransigence of a Republican Congress and Blue Dog Democrats who prevented a right size stimulus, looks nothing like the Republican narrative of his job creation prowess. The chart is self explaining.

What is important was stated clearly by Krugman. Are you creating jobs if the jobs on your watch were effected by purchasing another company or at the expense of job losses by your competitor? ABSOLUTELY NOT! For Romney, any job creation he claims is likely a zero sum gain. Based on the job pilfering he did at Bain I would wager that he is likely a net job destructor, but coming to a deterministic value is rather dubious.

So when you are listening to anyone talk about Romney’s business experience or job creation claims, make sure to set the record straight immediately. Do not allow a false narrative to metastasize. That is how those that have destroyed our economy were successful in taking back Congress. Creating a false state of reality.